When to repair vs. replace those pricey home appliances

When to repair vs. replace those pricey home appliances 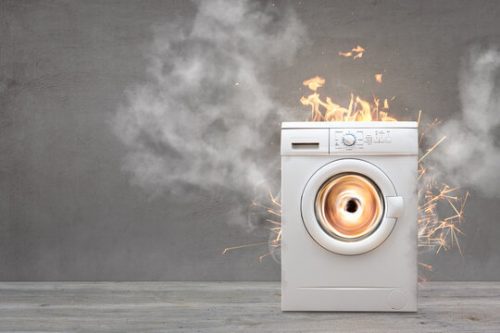 Nobody buys a refrigerator to solve their midlife crisis. And yet the price of some home appliances is next in line after little red convertibles.

“Other than houses and cars, home appliances can be the biggest investments homeowners make,” points out Chris Granger of Sears Home Services. That’s why — boring or not — it’s important to know what you’re doing when it comes to repairing or replacing your home appliances.

The first thing to know is the average life span of various home appliances. According to a National Association of Home Builders study, you can expect roughly the following:

The actual length of time an appliance lasts depends on the brand and how well you maintain it.

“The number one mistake homeowners make is not performing routine appliance maintenance,” Granger said. “Appliances are like cars. If you don’t maintain them regularly, they eventually break down.”

To improve upon the numbers above, Granger says, you should vacuum your refrigerator coils, keep your dishwasher drain and filter clear, clean your oven regularly, remove lint from your dryer vent (not just the trap) and never overload your washing machine.

But even if you follow all of this good advice, sooner or later one of your appliances is going to stop working — probably the same day your mother-in-law visits. And then you’ll have to make the nerve-racking decision of whether to repair or replace it.

The technicians at Sears Home Services have seen it all in their 7 million service calls annually and say that these are the telltale signs that your appliance is a goner:

Dryer: If it’s emitting smoke, it’s not cost-effective to repair it.

Oven: Rust on the sides is too expensive to fix.

Refrigerator: If the compressor isn’t running, that’s a $500 part, so it’s usually better to replace the fridge.

Washer: If it won’t spin, the repair involves dismantling much of the machine, which is costly.

Have a different problem? Here’s a rule of thumb that can lessen the pain: If the repair will cost more than 50 percent of the price of replacing the appliance, you should get a new one.

An argument can be made to replace appliances even sooner, if you can afford it.

“If you’re in the position to replace an old appliance, there have been huge improvements in functionality that can make your life easier,” Granger said. For example, many modern washers, dryers and refrigerators can hold a lot more than they used to. And you can now control many appliances from a smartphone. Plus, newer refrigerators use about half as much energy as older models.

If you do the math and choose to go the repair route, be savvy about that transaction. First, check your warranty. Many household appliances have long-term manufacturer’s warranties. Next, do business with repair companies that you seek out, rather than those that approach you. Some appliance repair companies go door-to-door offering free or cheap inspections, then use that opening to claim you need expensive work.

When the technician comes to your home, ask for a written estimate. That estimate should list all parts needed, plus labor charges. You want it in writing because some states require the technician to get your permission if the price is going to rise more than 10 percent above the written estimate. Find out whether the company offers a warranty, and get that in writing as well.

Finally, pay little or nothing upfront. Fly-by-night companies have been known to demand payment in advance and then disappear. Established firms should not ask you for any money at the beginning of the job.

Know these rules and you can avoid repairing your appliances this year only to replace them next year.